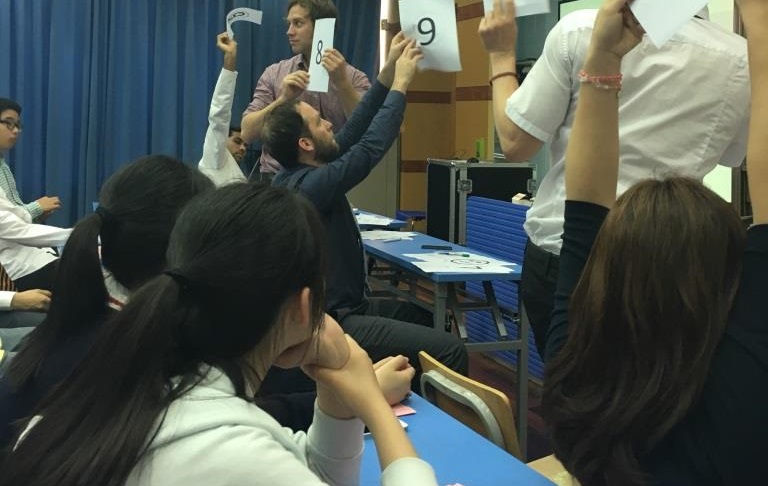 A long time before the student council election, the candidates prepared their speeches and posters. Students could feel the competitive and serious atmosphere on the sixth floor and tried to pay attention to it. I had the honor of interviewing one of the candidates, Lilian, about how she felt before the election. “I was very, very nervous, but I think I should be responsible for what I want,” she answered.

We were all really looking forward to the speeches on Wednesday. More than half of the students think it was a fair election for all the candidates because all the students in the BC program voted. Some of the candidates talked about improving the student council and listed the things they were good at. For example, Jerry Li is good at making videos and the video students saw at the assembly that day was very impressive, so he was elected to be the media person.

The votes were written on small pieces of papers and secretly counted by the teachers. Of course, some people won and some people lost. I hope the students who won will contribute into developing the student council more. Lilian said “this student council election allowed everybody to try new things and learn from them.” And for the students that lost, I interviewed Jerry Liang in particular. He said “even though I didn’t win, I learned a lot. For example, how to respond in big cases and how to adjust my mentality, etc. I may have lost this time, but I believe it will be a cornerstone for my next success.”

I also interviewed some of the audience such as Tiffany, Jimmy and an anonymous viewer. Our anonymous person thought it would be better if more boys could participate in the election. Tiffany said the student council election was pretty fair because it provided students a wide platform to show their talents for students to choose. What’s more, Jimmy thought it was a great chance for students to express themselves. Even if your GPA was not good enough, but you had a good relationship with classmates, you would probably have a chance in the election.

One last thing, I am going to congratulations the student council again because many of the students put so much effort into it. The student council will provide more chances for all students to enjoy life at Luwan BC, including games and schedules for the upcoming Halloween and Christmas events. Let’s see what the future brings!