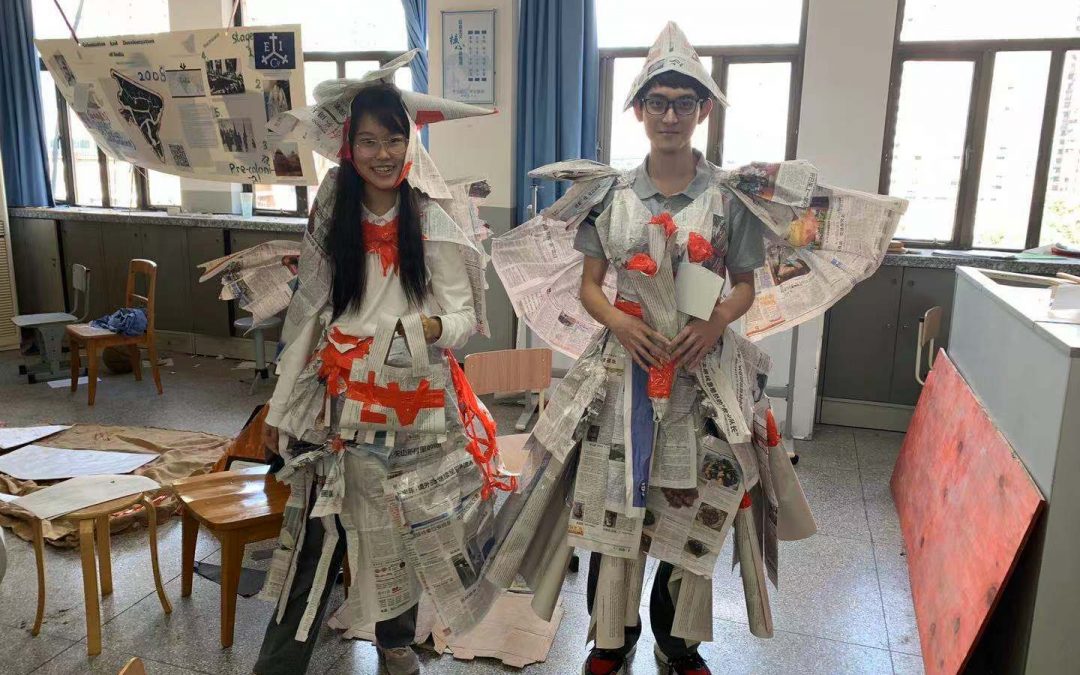 Amy Chen & Jacky Chen October 10th was an unusual day for all students in Luwan BC, not only because of the wonderful student council election, but also because of the fabulous fashion show. Yes, it was the first time that all Luwan BC students from three grades gathered together in one hall and joined the event this new semester! First and foremost, we observed a fashion show given by one of our dearest teachers, Mr. Bisnauth. Mr. Bisnauth wore a vivid armor which was made by newspapers, where the dark green surface covering his arm shining a decent green light, and with him by his side was the best sword for adventurers. The whole costume was united with color blending, which definitely showed that this costume was a magnificent work filled with passion from the teachers. All students were shocked with their mouths wide open; they were inspired by the creative ideas from their teachers. After that, the different house teams went off to different classrooms to use newspapers to create their own amazing costumes.

The first team to present their outfit during the fashion show was team grey. The grey team display absolutely fulfilled the word of creative thinking. They transformed the runway show into a wedding ceremony. Ethan and David went up to the stage and acted just like a new couple. The clothes were grey, with stripes of darker grey for decoration. Ethan wore a slim suit which covered only his upper body, while David, the bride, was wearing a tube top princess dress with a veil covering his face. Oh, what a sweet young couple 🙂

The arrival of the orange team interrupted the wedding ceremony with a giant horse and an orange knight. Jason arrived with his shiny armor and his pride horse. The horse rushed onto the stage, with sword slashes and screaming sounds made by the horse. Students were astonished since they found that the horse could stand on its two back-legs and speak English. Actually, the horse was acted by Jeffery.

Freeze! With the little rabbit Jacky and the rich woman Irene, they arrived on stage. Jacky wore a pair of funny bunny ears with his body covered fully by the pink tape. Irene’s costume was probably the most expensive one of all the teams——an LV bag made with newspapers! Irene also wore clothing from Armani and carried a big ring the size of a chicken egg, which was really cool.

Look out! There was a snake creeping onto the stage. Pause, don’t panic, this was Medusa with her green hair as well as heart shaped glasses. Her pace brought the audience back to ancient Greek mythology. She waved her staff which had a green pendant inside, demonstrating the confidence and the bravery to fight against authority. Students were really impressed with the costumes, with continuous cheers throughout the fashion show.

Who was crying there? The adorable peacock with shiny and plump feathers rushed to the middle of the stage, trying to escape from her misfortune. Behind the peacock, a hunter who held his gun and knife chased the peacock closely. This is the conflict between human beings and animals. Members from the yellow team used their creative and critical thinking skills to develop a scenario about the hunting games. Do we really want to kill such beautiful creatures to merely fulfill certain desires? The performance unveiled the saying of “without purchasing, there will be less killing.” All students applauded this theme for a long time.

Ultimately, it was the red team’s turn to reveal their passion in the fashion show. Danny and Nancy wandered together to the middle of the stage, wearing a revealing outfit and Lolita clothing respectively. It seemed that they were performing in the Victoria Secret Fashion show, with elegant dresses as well as exquisite angel wings. Their performance was full of passion and charm, and students were reluctant to end this marvelous fashion show.

All the students from Luwan BC had a good time together with their teachers and we really enjoyed the performances in the fashion show. At the end, I just wanted to say a quick thanks to Milo in grade 12 who helped us with some of the details of the event.