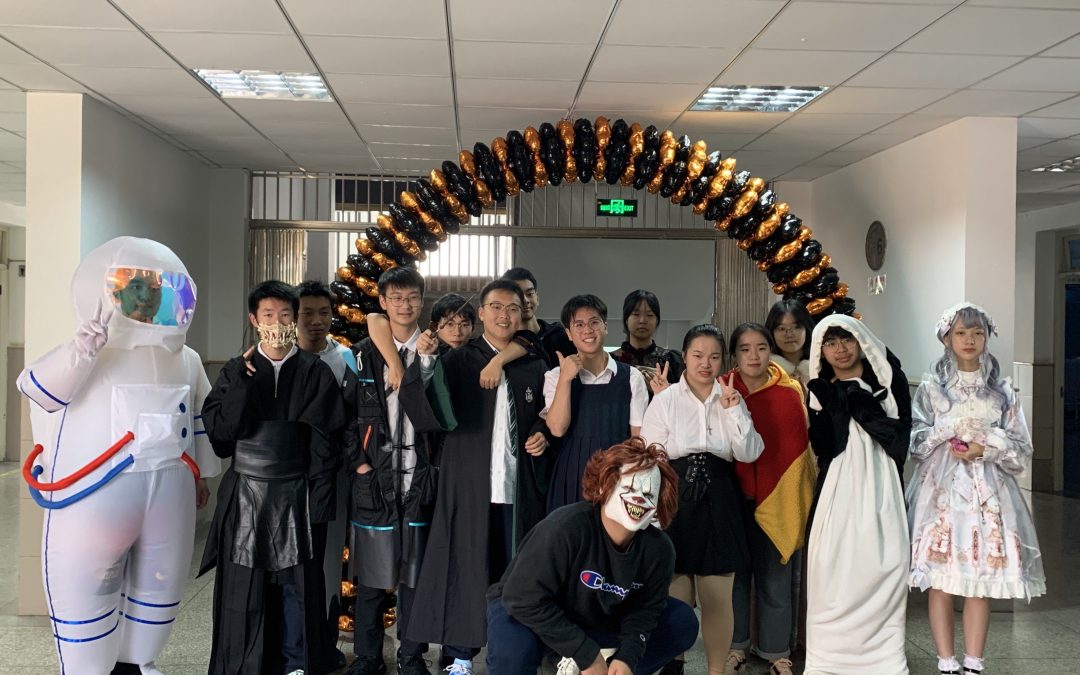 Yellow pumpkins, scary music, bloody scars. When we saw the decorations, we knew that the annual Luwan BC Halloween day was here again.

The student council prepared for this Halloween for several weeks. Under their careful preparation, the whole school was shrouded in darkness and terror. First, when students arrived at school, they saw an arch made of pumpkin balloons greeting them. As we walked slowly along the corridor, we found that all the lights had been tightly covered out. On the seventh floor, where the most terrifying activity took place, they had even set up a “haunted house” which contained cobwebs, piled up chairs, heads hanging by the door and blood stains on the floor. In such a spooky atmosphere, the students could feel that Halloween was really here.

In addition to the fine decorations, the student council also prepared many interesting games for each house team to play. There was a total of eight games spread out on different floors, which were “Situational Puzzle”, “Root Expansion” and “Draw on People’s Back” on the fifth floor and “Woodman on Halloween”, “Little Play by the Host” and “What’s in the Box” on the sixth floor. On the seventh floor, students participated in a role-playing activity and played ring toss games after the scenario was played out.

On the fifth floor, we had three games for each team to play. The first one was called Situational Puzzle. In this game, the host would tell a short story with no plot, but only the beginning and the ending. Students needed to ask several questions in order to find out the whole story. The host could only answer “Yes” or “No” to those questions.

On the sixth floor, there were three main activities. “What’s in the Box” had students choose a box with a number on it, then do some actions related to the number, and then open the box to see if they got a piece of candy or a bomb. “Little Play by the Host” had one host perform a short play, and the other host asked questions according to the play performed before. The students were tested on their attention to detail as well as their memory. In “Woodman on Halloween”, there was also a host dressed as “Demogorgon,” the well-known antagonist character in the TV series “Stranger Things”. The monster would creep up to students quietly coming from the back of the dark room and gently tapping their shoulder with its deformed fingers. If the students looked back, they saw that horrifying image and some students were even scared to the point of falling onto the ground.

In addition to the games played on the different floors, the student council this year planned an overarching theme for the games to connect them. The reason why the sixth floor had been shrouded in darkness was because “The Old Ones” had once again descended onto the world. The students were villagers of LWBC looking to solve the mystery with the help of “oracles” (the hosts) who spoke in riddles. In each house team we set up a “spy,” who was working for the Old Ones. They wanted people from other teams to do specific actions without them realizing they were spies. If the unsuspecting student did the designated action, they were considered “killed” and the Old Ones were one step closer to taking over the whole world. At the end of each individual small game, the host read a short paragraph, which was a hint to figure out who the spies working for the Old Ones were.

In addition to the riddles of the oracles, at noon we needed to find hidden pumpkins around the playground. Among them were ordinary pumpkins, while some others included clues about the spies. Through the previous actions and clues, the other students (villagers) had to identify who the spies were in order to save the world from the clutches of the Old Ones. In the end, the villagers were able to identify the correct spies, and our LWBC Village was saved!

All of us experienced the wonderful atmosphere of Halloween and enjoyed the immersive and interesting activities. People are all looking forward to discovering what the student council has in store for the other festivities of the year!